SLRSA ENDS BOARD AND MANAGEMENT RETREAT 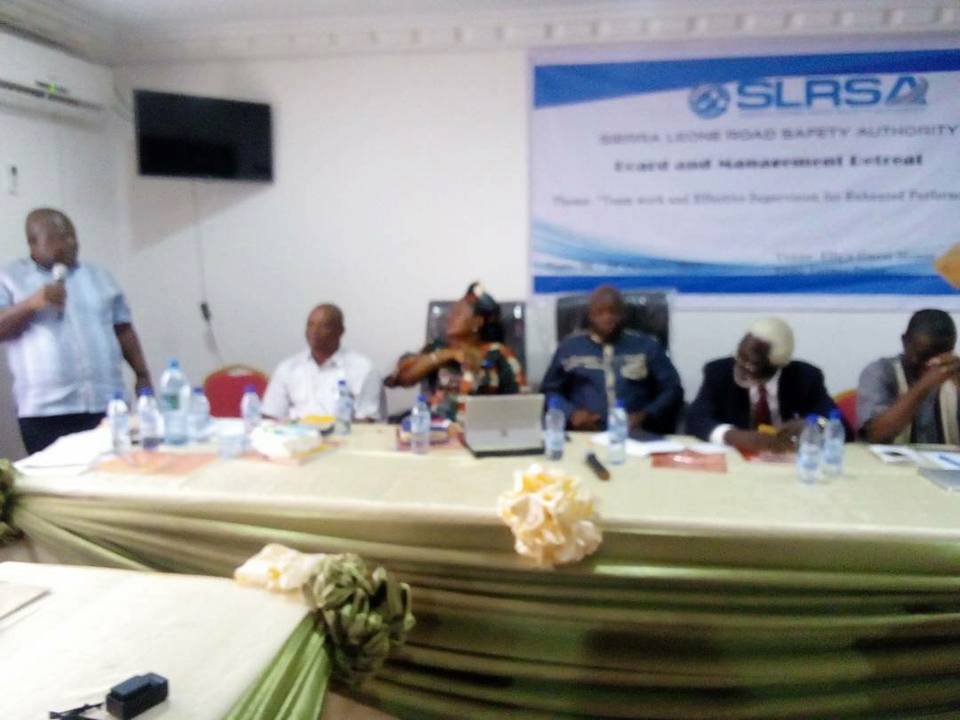 The Sierra Leone Road Safety Authority on Saturday 28/10/2017, ended a three day Board and Management Retreat at the ELLY’s Guest House, Femi Turner Drive, Goderich.
The three days program which lasted from Thursday 26th to Saturday 28 October 2017 had as its Theme:Team Work and Effective Supervision for Enhanced performance.
Delivering his key note address Deputy Minister of Transport and Aviation Honourable Momodu A. JALLOH, said a retreat is a Modern Management Strategy that seeks to maximise the full potential of staff by giving them the opportunity to nurture their skills talents and competence. The Deputy Minister also disclosed a retreat is often a time for reflection ,assessment and performance of activities of staff. He encouraged participants to make good use of the opportunity and not to see the event as just another time out .

The chairman Board of Directors, SLRSA, Reverend Michael Samura, said the program was for staff members to present work done over the period under review and to plan for the coming year. The chairman expressed the hope that the teamwork not only come up with a plan that will benefit the authority, but the country as a whole.

In her overview, the Executive Director SLRSA, Dr. Sarah F Bendy, Said the focus of the authority since 1996 was the Registration of vehicles and Licensing of Drivers. She pointed out that this was reflected in a world Bank Report in 2011.The Executive Director said following the publication of this report, the focus of the authority changed. The ED further stated that in 2013 ,the Board and Management restrategised their efforts towards Road Safety as mandated by Law and to ensure that and to ensure that the authority took the lead in addressing the UN Decade of action for road safety.

Dr Sarah bendu said in order for the authority to position itself in line with its new focus, a theme was developed in 2013’Re-engineering’ for better performance. The ED further intimated that in 2014, an other was also developed ‘Re-branding the SLRTA for better performance.. This theme the ED said led to several changes including :the Change of name of the authority and logo, Re-branding of staff and vehicles, training of staff, rehabilitation of the authority’s workshop and the introduction of large number of tow trucks to clear Abandoned vehicles and street garages. The ED was optimistic that the outcome of the retreat will be of benefit to the authority .

Other major highlights were the Presentation of papers by Mr Andrew Fatima,. Mr Abdul Raman Sowa..
After the presentations, participants were divided in to groups to come up with ideas that will move the authority forward.