Following a process which started in 2018, the Sierra Leone Police (SLP) and Sierra Rutile Limited (SRL) have finally signed a Memorandum of Understanding (MoU) to concretise and formalize their preexisting cordial relationship.
The signing took place in the office of the Inspector General of Police at Police Headquarters, George Street, Freetown.

In that document, the SLP pledged to strengthen mechanisms for strong partnership with Sierra Rutile; expand Local Policing Partnership Board members to accommodate representatives from the company; joint community sensitization and consultation to reduce incidents that affect the operations of the company; speedily respond to and investigate matters related to the company; among others.

On the side of Sierra Rutile Limited, the company pledged to boost personnel attached to it with compensation for hardwork, vehicles – including maintenance and fuel cost, communication, utilities, protective gears, medical sevices, etc., so as to ensure the full implementation of the MoU.

Speaking during the signing ceremony, the Corporate Affairs & Government Relations Director at Sierra Rutile – Mrs. Aminata Kamara noted that the move towards signing the MoU started way back in 2018. In excitement, she added that in just four months when they contacted the Inspector General of Police – Mr. Ambrose M. Sovula, the long anticipated MoU has become a reality. Mrs. Kamara made it clear that they needed the MoU to properly undertake their Corporate Social Responsibility (CSR). “…though we pay taxes for such services, we need to recognize and support the officers being sent to our locations,” Mrs. Kamara asserted.

Having been excited with the offers being made by Sierra Rutile company in the MoU, the Inspector General of Police said that such offer from SRL will inject some lubricants into personnel and spur them on to do more in creating an enabling environment for profitable and effective operations of the company and the people of Sierra Leone.

The IGP closed by stating that “…though we expect them to do more, Sierra Rutile has been doing great things in Sierra Leone”.

Giving the vote of thanks, the Deputy Inspector General of Police – Mrs. Elizabeth A. Turay assured representatives from the company that the SLP’s management will ensure the full implementation of the MoU. She said the occasion was the turning point for both institutions. 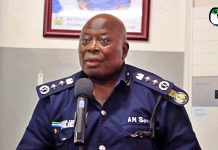 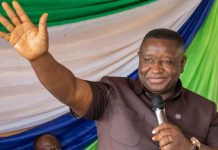