Where Sierra Leone Is Never Too Far Away
Blog
Updated: January 18, 2019 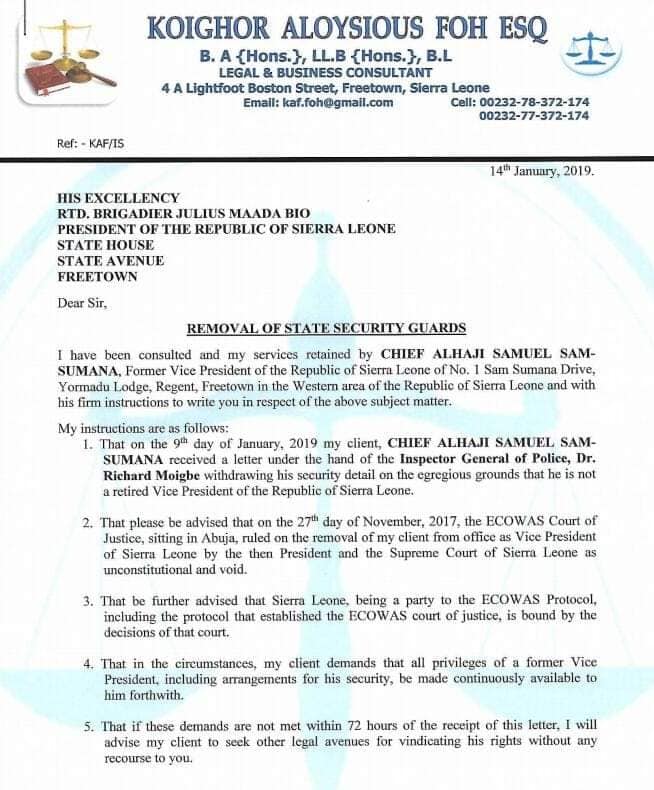 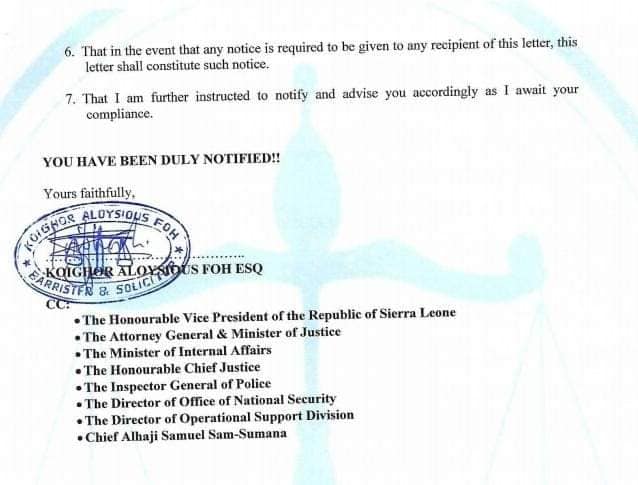 In the aftermath of the withdrawal of the Sierra Leone Police security personnel that were detailed and securing the former Vice President, Alhaji Chief Sam Sumana, sources close to the former VP have intimated this medium that he may take legal action against the Government of the New Direction for violating his right as a retired VP to be entitled to security as laid down in the constitution of the country.

In a letter written to President Julius Maada Bio by the lawyer of the former VP, Alhaji Chief Samuel Sam Sumana, Koighor Aloysious Foh Esq. of 4a Lightfoot Boston Street, captioned; REMOVAL OF STATE SECURITY GUARDS, His Excellency was informed that a letter dated 9th January 2019 was received by the former VP signed by the Inspector General of the Sierra Leone Police stating withdrawal of his security detail on grounds that he is not a retired VP and is not entitled to such privilege.

The letter further reminded President Bio that on 27th November 2017, the ECOWAS Court sitting in Abuja ruled that the removal of the VP by the former President and the Supreme Court of Sierra Leone was unconstitutional and void.

It also reminded the President that Sierra Leone is a signatory to all the ECOWAS protocols, including the establishment of the said court of justice. It further demanded that in the light of that ruling, all the privileges of a retired VP, including his security be accorded him continuously according to constitutional provisions. It also stated that if no compliance is observed in that regard, legal action will be taken to seek redress.

Meanwhile as political tension continues to rise in the country, the President of the ECOWAS Commission, Dr. Jean Claude Bru and the Special Representative of the UN Secretary General for West Africa, Dr. Mohamed Ibn Chambers and the ECOWAS Commissioner for Political Affairs, Peace and Security, Gen. Francis Behazin are due in the country to hold talks with President Bio and the Chairs of the Political Parties and Diplomats. They are expected to meet with key Civil Society Organisations and the Inter-Religious Council between the 17th and 18th January 2019.

Human Trafficking:.. 61 Sierra Leoneans To Be Repatriated From Senegal

By Ishmael Bayoh The International Organization for Migration (IOM) will on Tuesday August 11th, 2020 repatriate 61 out of...
Read more
Press Release

Human Trafficking:.. 61 Sierra Leoneans To Be Repatriated From Senegal

By Ishmael Bayoh The International Organization for Migration (IOM) will on Tuesday August 11th, 2020 repatriate 61 out of...
Read more