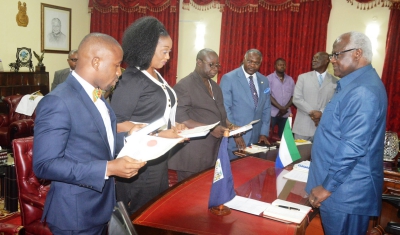 Newly appointed Commissioners of the Human Rights Commission of Sierra Leone (HRCSL) on Tuesday, 2 May 2017, subscribed to the oath of office at a ceremony at State House in Freetown. The three newly appointed commissioners are Mr Rashid Dumbuya, Rev. Dr Usman Jessie Fornah and Ms. Grace Coleridge-Taylor.

Congratulating the appointees, President Dr Ernest Bai Koroma said the commissioners were coming in at a time when the country’s human rights record is at its best since independence in 1961. He pointed out that the country’s human rights commission was upgraded to a class A status by the United Nations Human Rights Council, adding that Sierra Leone is now a member of the UN Human Rights Council, indicating that it was as a result of the recognition of the significant gains and progress made to improve the country’s human rights record. “We can now boast of an excellent human rights record and for almost ten years now we have not had any political prisoner,” he said. He expressed hope that the incoming commissioners will show commitment to sustaining these efforts and hope that their experiences and qualifications will help them to discharge their duties and fly the flag of Sierra Leone.

On behalf of the appointees, Ms. Grace Coleridge-Taylor thanked President Koroma for the trust and confidence reposed in them and promised to carry out their duties with utmost diligence and to make Sierra Leone proud. 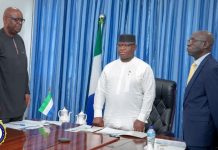 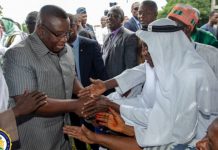