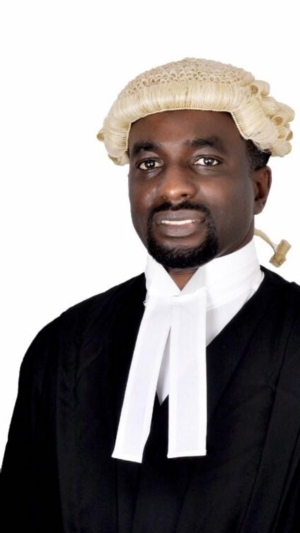 Melron Nicol-Wilson Esq who was the former Ombudsman of the Republic of Sierra Leone has returned to private legal practice, at his old law firm Nicol-Wilson and Co, Malaika Chambers that he established 15 years ago , as a full-time managing partner.

The move means Mr. Nicol-Wilson returns to private practice to continue his highly rated legal work for almost 20 years dealing with major cases. He has a wealth of experience across all aspects of criminal and human rights law and has right of audience in all courts in Sierra Leone , The ECOWAS Community Court , The African Court and The International Criminal Court in The Hague . He has developed a reputation as resourceful and measured advocate for high-powered cases and has won a number of awards including the prestigious African Human Rights Lawyer Award and the AWOL lawyer of the year .

The reputable International Criminal Defence and human rights lawyer, Nicol-Wilson worked for 15 months as Ombudsman after signing a Four Year Contract with the Government of Sierra Leone in May, 2017, serving the previous APC Government for 10 months and the present SLPP Government for 5 Months .

Nicol-Wilson has been credited with repositioning and energising a previously demoralised Office of the Ombudsman and helping secure its independent future with a series of high-profiled investigations into alleged administrative injustices and human rights violations in the country. He helped secure a four storey building for the Office of the Ombudsman with modern facilities as well as building trust with the members of the public and effective reporting mechanisms. He recruited 20 additional technical staff members, developed a five year strategic plan with support from the United Nations Development Programe (UNDP), and opened a new regional office in Port Loko, with additional support to offices in Bo, Kenema, Makeni etc.

Nicol -Wilson is a former Defence Counsel and case manager at the Special Court for Sierra Leone ; the first legal adviser of the Anti – Corruption Commission ; the first coordinator of the Pilot National legal aid scheme that gave birth to the Legal Aid Board ; a former Teaching Fellow at Columbia Law School in New York ; and a former founding Director of the Lawyers Centre for Legal Assistance, the first legal aid institution in the country .

He added: “I am delighted to return to Nicol-Wilson and Co, a firm which believes in delivering value to its clients and advancing the rule of law. It is with great enthusiasm that I join the law firm and a dedicated team, with a vision to expand across the country and deliver work internationally.

At Nicol-Wilson and Co ( Malaika Chambers) he will have a strategic and wide-ranging role , leading a team of distinguished lawyers both from Sierra Leone and abroad, in advancing human rights , Administrative Justice , criminal law as well as supporting major national and international businesses in delivering practical, commercial, solutions-focused legal services.

Previous Timothy Kabba Talks On Oil And Gas Exploration In Sierra Leone
Next In The Wake Of The Mile 91 Killing… Who Polices The Sierra Leone Police?