Where Sierra Leone Is Never Too Far Away
News
Updated: December 6, 2017 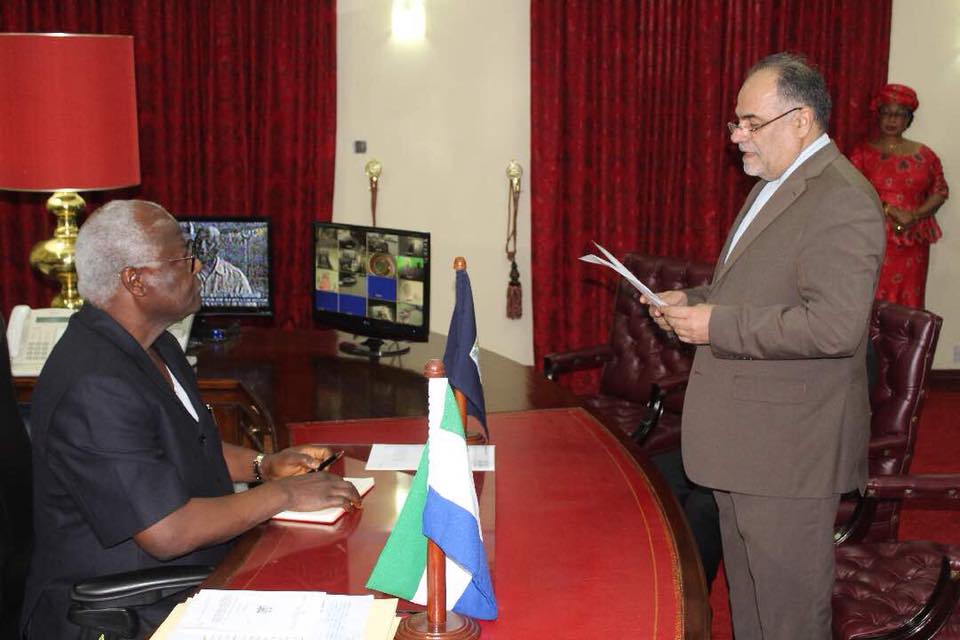 Dr Samura Matthew Wilson Kamara received a big boost today Wednesday December 6th in his run for the presidency, when the Dean of the Diplomatic and Consular Corps in Sierra Leone His Excellency Lotfollah Bakhtiari, ambassador of the Islamic Republic of Iran congratulated President Dr Ernest Bai Koroma for his decisive choice of selecting Dr Samura Kamara as the APC presidential candidate in the forthcoming general elections.

“The gentle honourable-endeared personality is not only accredited as national and international respectable figure, with wide political and economic experience, but one who is also commended for his decency, moderate and humble character,” ambassador Bakhtiari said during a farewell courtesy call on President Koroma at State House. “In connection with the forthcoming elections, I join the cherished wish of everyone for the conclusion of a peaceful election with full participation of all voters.”

The outgoing Dean of the diplomatic and consular corps said that despite the two years of Ebola coupled with other challenges, the cause of maintaining and strengthening the bilateral friendly relations and mutual cooperation between the two countries has been promoted more than ever. He disclosed that approval has been secured for the establishment of a Vocational and Technical Institution which includes its construction, importing of modern equipment from Iran and training of trainers. “There is also a pending team of experts from Iran to carry out feasibility studies and verification of the sight and other related assessment activities for the possibility of kick starting of the vocational and technical institution project,” he said. Ambassador Bakhtiari further informed that the Iranian embassy continues to engage with local authorities who have already demonstrated spirit of willingness to confirming their readiness to collaborate in seeing the project through.

President Koroma thanked ambassador Bakhtiari for all the support provided during the unprecedented Ebola epidemic and extolled the bilateral ties the two countries have enjoyed over the years. He stated that the cooperation between the two countries particularly during the ambassador’s tour of duty was conducted at the highest level and without any limitations.

The president also expressed satisfaction over the level of cooperation between the two countries especially in the area of trade and economic cooperation where they have had few visits resulting in the signing of a Memorandum of Understanding, adding that government lost at least two years of meaningful engagement due to the Ebola outbreak. He however expressed hope that discussions have restarted and registered government’s commitment to reinforce bilateral economic cooperation with Iran.

President Koroma also welcomed the idea of establishing a Vocational and Technical Institution in the country, saying that government was upbeat about such institutions to equip young people with the right skills required to intensify ongoing transformative efforts. He reiterated government’s determination to continue to strengthen Sierra Leone’s relationship with Iran and called for more collaboration with the Government of Iran in the agricultural sector. The president assured the Dean of the Diplomatic and Consular Corps of peaceful elections in 2018.

Share
Facebook
Twitter
Pinterest
VK
WhatsApp
Previous articleRetirement Benefit For House Speaker And Other Top Government Officials
Next articleMy government has been able to invest in our people more than anytime in this country’s history – President Ernest Bai Koroma.
- Advertisement -