Development Pathfinders, September 25th 2018: The Africa-focused development research think tank, Development Pathfinders, in collaboration with our co-sponsors, including the New York Metropolitan College, the Sierra Leone Investment and Export Promotion Agency, Njala University of Sierra Leone, United African Congress (UAC), the Sierra Leone Mission to the United Nations, the Sierra Leone Embassy to the United States in Washington D.C, Wai and Associate CPAs, and the Cotton Tree Medical Group, is pleased to inform the public about the successful completion of all planning activities for the September 27th 2018 Diaspora Investment Forum on Sierra Leone at the Metropolitan College of New York located on 60 West St, New York, NY 10006 from 05:00 PM – 09:00 PM Eastern Standard Time.

So far, we have successfully accepted offers to participate at the event from over 200 people affiliated with over 100 companies/industries/businesses. We would like to express our sincerest thanks and appreciation to the event’s co-sponsoring organizations, including: (i) the Sierra Leone Investment Export Promotion Agency (SLIEPA whose CEO will be in attendance to present the role of his organization in easing business startup in Sierra Leone and to answer questions about the country’s climate and opportunities for investment; (ii) Metropolitan College of New York whose expert representatives will shed light on public policy considerations in foreign investments and international trade as well as diaspora capacity building; (iii) the Sierra Leone United Nations Mission and Embassy to the United States whose representatives will highlight their agenda for championing investments in Sierra Leone by US and international companies, (iv) the Cotton Tree Medical Group (CTMG) whose US based physician/entrepreneur will shed light on opportunities for social enterprise investments in the health sector, (v) United African Congress whose broad spectrum of US/African/Caribbean network and intellectual capacity is at work helping to organize and facilitate the event, and (vi) Wai and Associates CPAs and Management Consultants whose wide range of expertise in business development, accounting, auditing, finance and strategic management consulting is uniquely positioned to provide assurance and advisory insight to investors and government.

The event will be climaxed by a keynote address by the President of Sierra Leone, His Excellency Julius Maada Bio, who will lay out his administration’s agenda for creating a win-win investment climate in Sierra Leone.

Development Pathfinders has also invited several high-level officials of the government of Sierra Leone to help meet the wider scope and objectives of the forum as envisaged by the organizers. They include: (i) Minister of Trade and CEO of SLIEPA, both of whom will lay out their respective agencies roles in facilitating trade and investment; (ii) the ministers of Finance, Information, Foreign Affairs and Development and Economic Planning, will each elaborate on the respective roles of their ministries in supporting investment promotion in Sierra Leone; (iii) the Sierra Leone Central Bank Governor who will shed light on the microeconomic and macroeconomic policies the government is committed to enhancing for profitable and responsible investments in Sierra Leone; (iv) the Executive Chairman for the Sierra Leone Environmental Promotion Agency, who will describe on the government’s commitment to an environmentally-friendly investment climate; and (v) the clerk of parliament who will describe parliament’s commitments in making investment-friendly legislations, while ensuring win-wins for the businesses, the people, the state, and the environment.

We would also like to recognize and extend thanks and appreciation to our hardworking organizers – Mustapha Wai, CPA, founder and managing principal, Wai & Associates CPAs, PLLC and president and CEO, Development Pathfinders; Mohamed Sidie Sheriff, Vice President/Chief Operating Officer of Development Pathfinders; Hon. Sidique A. Wai, president of United African Congress, community affairs analyst and adviser, New York City Police, and Sierra Leone Ambassador-Designate to the United States of America; Dr. Mohamed Nurhussein, chairman, United African Congress and chairman of the board, Development Pathfinders; Hon. Gordon Tapper, Chairman of the trustee board, United African Congress and Former Section Chief at the UN, and member of the board of Development Pathfinders; Dr. Judith Kuriansky, member of the trustee board of United African Congress, also an internationally known clinical psychologist and fellow of the American Psychological Association, United Nations NGO representative, and chair of the Psychology Coalition of NGOs accredited at the United Nations; Ivonne Reid, director protocol and deputy treasurer, United African Congress and legal assistant at Morrison Cohen LLP; Gary Schulze, retired official of the Metropolitan Transportation Authority where he served as Senior Advisor to the Inter-Agency Counterterrorism Task Force and a member of the fist U.S Peace Corps group sent to Sierra Leone; Dr. Fouad Sheriff, a US based physician/entrepreneur who brings to the team a wealth of experience in healthcare maintenance management in the US which inspired his people-oriented healthcare solution in Sierra Leone; Ian Campbell, an expert in political strategy and lobbying and a former congressional staff, who has worked with several foreign governments; Humphrey Crookendale, Dean of Metropolitan College of New York; David Aaron Hahn, Assistant Dean, Metropolitan College of New York; and many others for job well done and to encourage them to continue to work hard in making the event a complete success.

For more information about the event, please email [email protected] 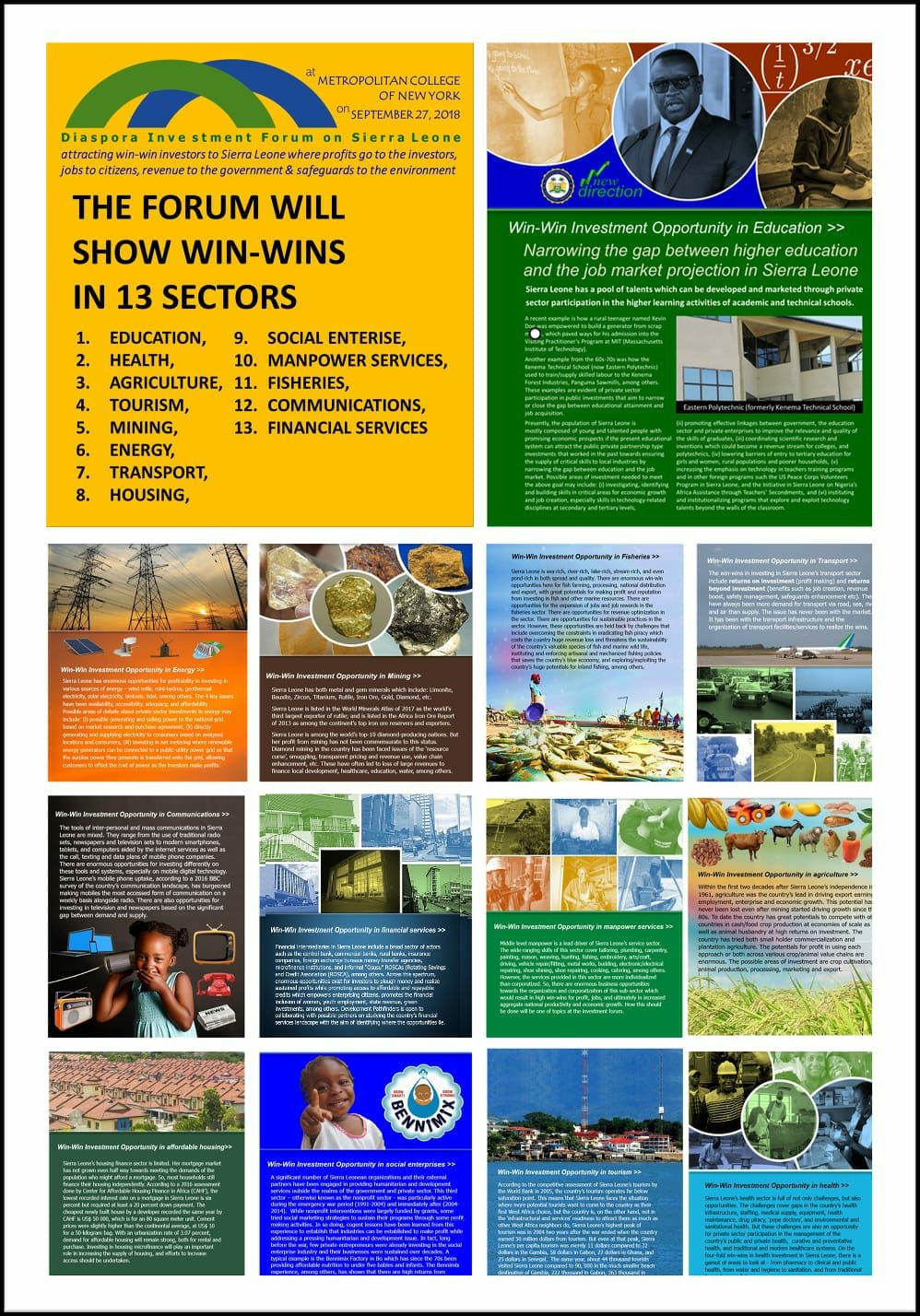