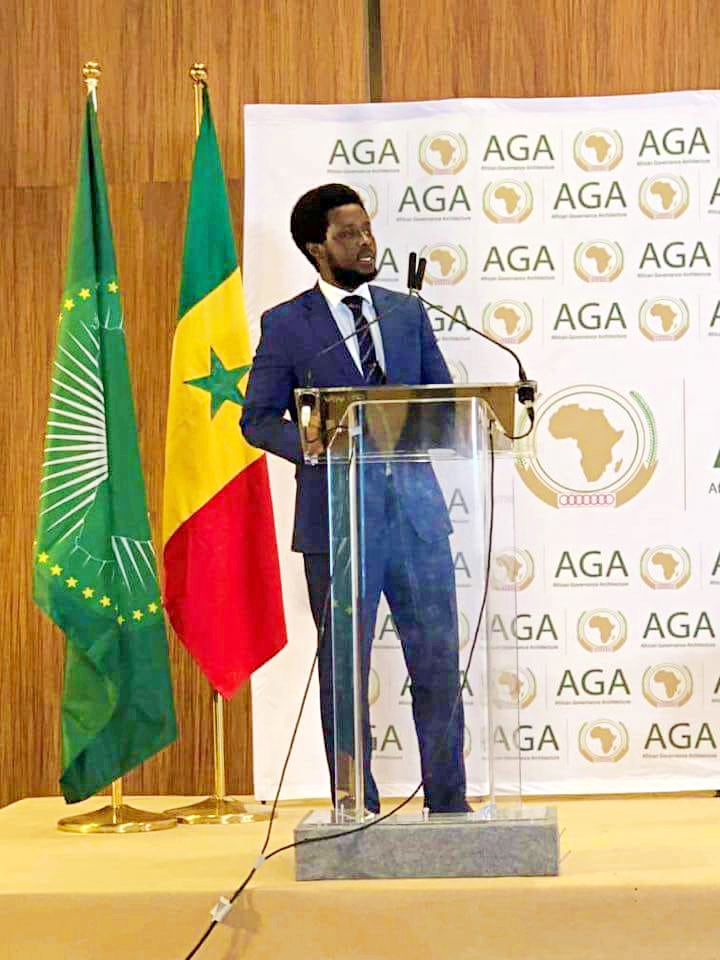 EXCERPTS FROM KEY NOTE ADDRESS DELIVERED BY FRANCISBENKAIFALA, THE COMMISSIONER OF THE ANTI-CORRUPTION COMMISSION OF SIERRA LEONE, AT THE WEST AND CENTRAL AFRICA REGIONAL YOUTH CONSULTATION MEETING ORGANIZED BY THE AFRICAN UNION IN DAKAR
SENEGAL FROM 5-7 SEPTEMBER 2018 UNDER THE THEME ‘LEVERAGING YOUTH CAPACITIES FOR THE FIGHT AGAINST CORRUPTION IN AFRICA’

1. . . . I bring you greetings from Sierra Leone; a country that epitomizes the full brunt of decades of corruption; but is now more determined than ever to fight corruption under the leadership of the newly-elected President, His Excellency Rtd. Brig. Julius Maada Bio, whose roadmap to victory, and economic development blueprint are predicated on the pillars of conscientious anti-corruption reforms – and was bold enough to put my humble self, a youth, in charge of leading the realization of it. . .

2. But, there are times when I think that some Africans do not understand the gravity of what confronts us, and the impossibility of progress we will endure, if we do not collectively put our weights behind the fight against corruption. Corruption violates the very foundation of democratic good governance when individuals snatch collective good for personal gain. In real terms, it is when those in charge of building schools for our children pilfer those resources and fewer or no schools are built. As a result, our children remain uneducated and cannot employ their full potential towards national development. It is when officers in charge of building State-of-the-Art hospitals syphon the allocated resources and plant substandard alternatives in their place, knowing that those cannot cater for the medical needs of our people. Consequently, corruption keeps us underdeveloped and leads to preventable death of our people at genocidal magnitude. It is by reason of the foregoing, and many more, that we cannot waiver, and we cannot allow this cancerous infection to continue to stunt our continent’s growth.

3. Given the reality then, it is no gainsaying that corruption represents the biggest inhibitor of Africa’s competitiveness with the world. . .

4. Many young people do not only have the desire and capacity to transform the world, but also the potential to positively affect anti-corruption reforms. As the new generation of politicians, entrepreneurs and civil society actors, youths and young people have an important role to play in bringing a new culture of integrity to all levels of the society, especially given the fact that youths and young people are also the most vulnerable to the effect of corruption in Africa.

5. Therefore, youths and young people should be taught to effectively detect, prevent and fight corruption. To this end, it is highly significant to devise appropriate empowerment strategies to raise their awareness levels and understanding of corruption; and the way it undermines democratic societies; and at the same time, build their capacities to stand up and fight corruption. . .

6. Critical to providing authoritative responses to the questions from the objectives of this consultative conference, is the institution and propagation of proper and sustained education on corruption; backed by an unflinching commitment by young people to refuse, reject, and report corruption at all levels; and in all jurisdictions of the continent.

8. The evidence is glaring! Africa loses too much to corruption; sustained and perpetuated by bad governance, lack of accountability, and transparency; Despite the potentials in our human and natural resources, the poverty rate in Africa is alarming. The irony of Africa is best illustrated in poverty amongst the plenty; the richest, yet the poorest continent. Various studies have supported the position that if we seriously maximize our revenue mobilization; utilize our resources judiciously by negating corruption and corrupt practices of all kinds; it would be extreme for Africa to need foreign loans and donations.

9. We can build our own schools; equip our own hospitals, with the best brains, best equipment, and medicines available. Now is the time to make that positive difference. I call on youths of the continent to push for that difference. Let us make it happen. Where else can victory be harvested; if not from us? We have to make it happen. The positive difference Africa has been yearning for can be realized through us.

10. As we strategize, we should keep in mind that youths do not function as homogenous groups. Therefore, in designing programs, policies and legislations, we should take cognizance of the fact that youths of yesterday, today, and tomorrow, have different perspectives, aspirations and motivations. Accordingly, accountability and transparency projects and support provided should be tailored factoring in the said diversity.

11. In order to get the youths and young people to focus, and remain engaged in anti-graft initiatives and activities at all levels, they must be included and made integral stakeholders in any national policy development and implementation of anti-corruption strategies. We must move away from using youths as statistics. Youths and young people must not only be made to know that they own the processes; they must actually own it. We must keep youths engaged as leaders.

12. The AU should set up national networks where young people can share their experiences and knowledge about corruption and corrupt practices; disseminate good practices and devise proposals for future action.

13. We should introduce integrity studies, from the earliest age, in the national schools and universities’ curricula, including both the aspects of personal values and ethical behaviors through a human rights-based approach.

15. African States should offer more and more trainings and grants to young people in support areas like film-making, journalistic writing, photography, etc., to enable them become a “relay” to disseminate the values of transparency, integrity and good governance.

16. It is my settled view that these expected outcomes can only be achieved through democratic good governance in which state institutions are made the cornerstone of governance. So, back home, in Sierra Leone, I have adopted an approach I call “Radical Transparency Drive.” The object is to quickly reverse the scourge of corruption. Youths and young people are leading the way in my strategy. This approach constitutes a comprehensive method of fighting corruption, focusing on nine pillars: the youths and young people; Public awareness; anti-corruptions strategies; public participation; ‘watchdog’ agencies; the judiciary; the media; the private sector; and international cooperation.

17. The onus is on you to return to your countries and ignite a ferment of change in favour of an honest, fair, and just society. As we leave here with the goal to lead the transformative agenda of the continent, let us take seriously the words of Frantz Fannon – “each generation must discover its mission, fulfil it or betray it, in relative capacity”. If our mission is to be drivers of anti-corruption revolution on the continent, we must follow the following guide:
– Let us not firstly be corrupt: You cannot allow yourselves to do in private what you condemn in public.
– Advocate for better pay for public officers: It is appalling that many of our civil servants are paid pittances, and on many occasions not on time. Our Anti-Corruption campaigns should not omit a call for salaries that are commensurate with services rendered.
– We should Explore innovative methods of transaction: There have been many significant technological innovations that could be useful in the fight against corruption. The fight against corruption is going to need your innovative technological skills to transform both our governance structures, review our systems and processes, and negate those that facilitate and fuel corruption.
– Report Corruption: we can learn from the American airport campaign against terrorism in our fight against corruption: when you see something say something. In order to create a culture that rejects corruption, we must report corrupt practices we witness.
– Above all, Live with integrity: This comes back to the idea of what you do when no one is watching. It is not enough to scream “Stop Corruption!”, but then when it comes down to it, you are prepared to pay a bribe for something you need. The fight against corruption is a moral and ethical one. Therefore, our personal lives must reflect what we demand of society. There are those who will swear never to pay a bribe, but take bribe. Others will pledge never to embezzle public funds, but remain quiet because their family or best friend is involved. You are equally guilty! Integrity is an encompassing expectation of decency that young people must embody in order to win this fight against corruption.

CONCLUSION
18. When you examine the numbers within the past decade, our Continent has not made much progress in the fight against corruption. We are recorded as the most corrupt and poorest continent in the world. The numbers are bleak. It is shameful. Nonetheless, the future is not unwelcoming; and the road to a viable change for Africa, is not clogged with impossibilities. It just needs our collective will and actions!

19. I see a bright light at the end of the proverbial tunnel. With you the young people on the side of justice; on the side of the truth; on the side of human rights; and firmly on the side of integrity and accountability; Africa is ready for a massive change. The answer is with us. We have the master key to unlock the true potential of Africa.

20. Therefore, I call on all policy makers within the African Union, AU Heads of states, and regional and sub-regional leaders, to empower and allow youths to lead in the governance of Africa. Our time is not tomorrow. Our time is now!

21. We should be taught and capacitated to effectively detect, prevent, and fight corruption. The moment is now for the young people to drive the change we need so that we can give Africa a New Direction.

22. Now is the time for Africa to turn long-held aspirations into concrete and authoritative actions. We the youths and young people should say ‘zero Tolerance’ to corruption. Fortune sides with those who dare. Let us dare corruption and fight it armed to the teeth to resist its retaliation.

23. Corruption is the urgency of today and the emergency of Africa’s tomorrow. Our generation must take collective action against the cancer of corruption. As it stands, Africa’s greatest hope lies in us. Now is the time to stand up and be counted for Africa. Now is the time to save our collective future or watch it perish like our parents’. Together, let us make corruption in Africa a risky and less profitable venture. Now that we have identified corruption as a common enemy; we must attack it knowing that our very survival rests on defeating it! Every generation has its defining moment; this is ours! Let us embark on this fight decisively and fearlessly. United, we can effectively rid Africa of corruption!